Unlike other iconic ballpark landmarks, no one really cares for the hill in Houston. In center field at Minute Maid Park, there is a 90-ft wide incline known as Tal's Hill, named after Astros team president Tal Smith. The idea for the hill is taken from some historic ballparks that had a natural incline (most famously, Cincinnati's Crosley Field). At a 30 degree incline, the hill in of itself would be enough of an obstacle to draw ire from outfielders, but to add to their misery, in the middle of the hill there is a flagpole, which is in play.

The hill has created some great catches, but both the hill and flagpole are not appreciated by outfielders, or by most fans.  In fact, fans started a petition to remove them both, but it has since been discontinued. 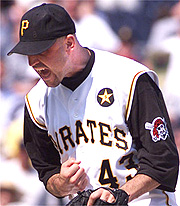 This Week in Sports History, July 6-12